The day has come and gone for my first overnight backpacking trip, and it was a 100 percent success. Success did not come without some challenges, though. This was a great trip for me to put my gear to the test before heading out on a two night, three day hiking adventure with some friends on the weekend before Thanksgiving. There were only two weaknesses in my gear that arose during the trip: water and foot gear. There was a third oversight in gear that caused a problem with my foot gear, but it’s almost unrelated; I misplaced my pocket knife.

The first thing that I noticed after hiking for several miles through the canyons with my 36lb pack was that my left foot started forming a hot spot under the ball. I didn’t pay much attention to it because I was so busy taking pictures. What amplified this issue is that when I sat down to have a snack and rest I couldn’t find my pocket knife to cut a piece of moleskin to put on that hot spot. I took my knife out of my pack and put it in the pocket of my pants somewhere between home and work on the day I was leaving for the canyons. My wife found it in the laundry the day I began writing this blog article, which was almost two weeks after the hike.

The weakness in my footgear is that my boots were still too new. I had only hiked two miles with weight on them, so they hadn’t softened up and formed to my foot. I also had some slippage because I didn’t tie my laces to keep my heel locked like I do with my running shoes. Since this hike I have been wearing my boots daily so that they’ll be broken in for the three day hike. Hopefully the mass usage will get them into shape!

The second challenge wasn’t necessarily a gear problem. I am blaming it on the weather. The intermittent creeks were non-existent on the back country trail. I drank my two liters of water before ever reaching my camp site. I was thirsty as crap when I arrived, but I didn’t have a clean source of water to use my Sawyer filter in. I saw on the map that there was a creek, but it was certainly a longer distance off the blazed path than I was comfortable venturing from. I did walk about a tenth of a mile down the embankment to find a very, very tiny stream of water. I dug a hole and let it fill up then I scooped the water into the Sawyer squeeze bag and drank the filtered output. Then I filled my Camelbak and climbed back up the hill and returned to camp.

In a pinch, the tiny stream was a great source of water, but it would have been nice if there had been a more substantial water source. This is one thing that I believe nature isn’t able to easily provide at Providence Canyon. It’s just not in the cards.

Everything else went great on my trip. Oh, there was that one time in the middle of the night when I woke up to take some night photos! I climbed back into the hammock, and the whoopie sling came off of the knot at the toggle, and the hammock dumped me onto the ground. No biggie.

I feel as if I am ready for the long hike with my friends in a couple of weeks. I am happy with my gear, and I feel as if I am prepared and knowledgeable in how to use what I have. This was the perfect trip to get to know  my stuff and myself. It’s going to be hard to keep the trails off my mind. 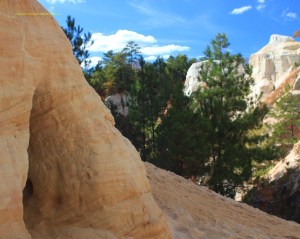 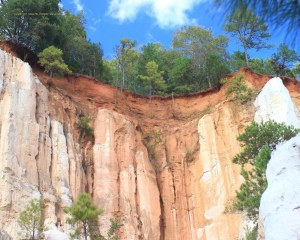